It would be remiss of me to come home after watching The Phantom Menace and not put finger to key in order to tell you what I thought of it in the off-chance that at least three other people will read my words, so here are my thoughts.

Definitely don't go if all you are going to do afterwards is wheel out the same tired old complaints that George Lucas has raped your childhood (in 3D), that he should stop fiddling with the work, that the film is a CG smorgasbord of crap, yadda yadda.
I'm terribly, terribly bored of listening to folks bitch about the film(s). 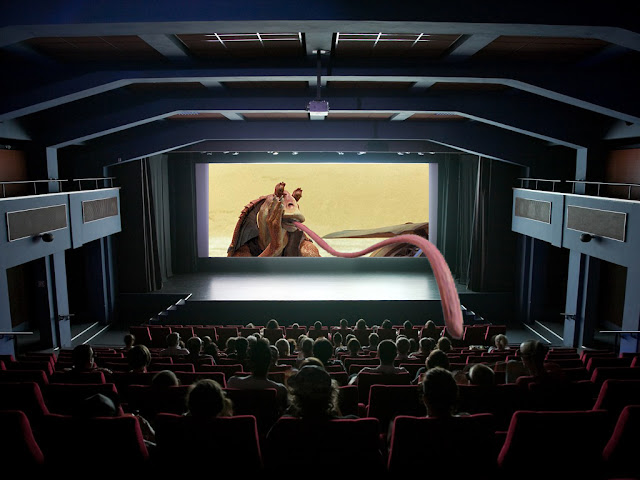 So, the lights dimmed, the 20th Century Fox Logo started, and I got a little choked up.
It's really hard to describe to someone who is not as immersed in this whole 'saga' as I am (and many more of my generation) the feeling you get from watching the films. Star Wars was a huge event in my life, I was 10 when the first one was released, and has been in my life ever since, influencing career choices, leading to marriage, creating circles of companionship I will treasure forever. In fact it is much like religion, but a lot easier to justify.

The Lucasfilm logo looked lovely in 3D, as did the opening crawl and the interior of the Councillor  ship being piloted by that girl from The Commitments. In fact, in general, the 3D wasn't too bad. On the sliding scale of post-converted 3D films, TPM was more Alice in Wonderland than Clash of the Titans. Of course, it was nowhere near as nice as a film actually filmed using 3D cameras, and I must admit that I was pulled out of the film on a couple of occasions (not hard to do) when some of the 3D effects didn't quite work, or worked too well.

The opening scenes on the Fed ship were very nice, as were the closing scenes of mayhem with lightsabers and other acts of nefarious doppelganging. However, scenes where the technique fell flat (pun intended) included all of the Naboo swamp/forest ones, as organic shapes really do not work as well as geometric ship and building interiors. Also, surprisingly, I found the podrace a little lackluster. There were too many 'fuzzy' shots of Anakin which felt like the whole process wasn't working, or the focus was on the wrong elements in the frame. Sadly, Bode and Feed (the announcer for those of you that are not as geeky as moi), was super-sharp and multi-layered - too multi-layered in my opinion. Take my word for it - check out the TV screens surrounding the announcer booth - there's some serious 1-dimensionality right there.

Having moaned a little bit, I really should add that Liam Neeson looks magnificent in 3D - it's as if the technique was developed just for ol' wolf-puncher.

Let's be honest here, TPM isn't the best film in the saga. It is the worst one by a long shot, and I really don't need to watch it in its entirety ever again. Of course I will, when my boy is old enough, but I'll probably doze off during the talky bits. However, the production design alone is worth it - I adore the look of the Naboo starfighters, the pilots' costumes,  the Queen's ship, the Bongo, Darth Maul and Sebulba. The sound design is pretty terrific (my silly cinema didn't have it cranked up enough for my liking) but, on the music front, this is not my favorite John Williams score, and I find the continuous music in the background a bit superfluous.

For some reason I was really aware of the pauses between dialogue - it really did need a bit of tightening up in the editing room - and only served to heighten the stiffness of the proceedings. In fact, for the first time it felt a little like watching a stage play, and the planes of scenery in each shot only reinforced this. Look out for this around Theed Palace, you'll see what I mean.

At the end of the day, I found myself sitting through the film, rather than enjoying the film, but with this one out the way we can look forward to the future releases. The space battle alone hinted at the wonders to come (it was very effective, by the way).

Should you go? If you love the saga with a passion, have a kid who hasn't seen it on the big screen, or you are a completist, then yes.
If none of the above, then no.

Hey, if it makes enough money, then we might get the TV show a bit sooner :)